Despite my hometown friends insisting that I have lost my southern accent, locals here hear my monotonous voice and without fail, it sparks the question, ‘what brings you to Birmingham?’ followed by the inevitable, ‘are you from London?’ And I’ll smile politely and say not quite, but pretty close and I’ll go on to explain why I chose the Midlands. Well, with season 5 of The Peaky Blinders in full swing, a spotlight shines on the heart of the Midlands once more, so I thought I’d take a moment to appreciate Birmingham and all of the other fab things that it is famous for.

Birmingham is home to the largest public library in the UK and the largest regional library and cultural space in Europe. Not to mention the Bullring shopping centre and the world’s largest Primark. I love London… to visit. I studied in London, I was coming to the end of my MA and considering moving there – but it is just so expensive. Even whilst studying, it was cheaper to commute in from 30 miles out than to live in student accommodation. I like Birmingham because it’s like a little pocket of London, just a bit more spread out and affordable. It’s the second-largest city in the UK, but is also the youngest city in Europe, with more than 40% of its population under the age of 25 - much of this owing to the vast student network of the city’s five main Universities (UoB, BCU, UCB, Aston and Newman), it’s buzzing nightlife and abundance of shopping centres. 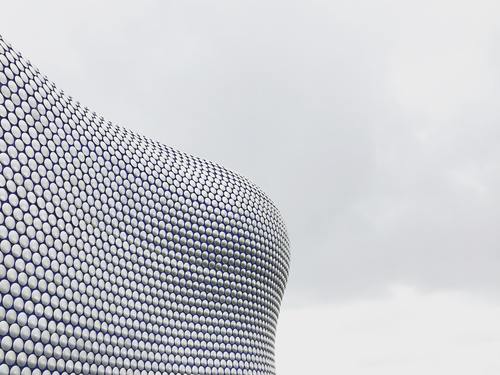 ‘Birmingham - the birthplace of innovation, has remained at the forefront of industry for centuries. Today, the region is home to some of the greatest creative and digital talent in the country.’ Cayven Valentine (Digital Marketing Recruitment Specialist).

Birmingham is following London’s footsteps in its creative media scene. London will always be the UK’s top hotspot for creative roles, but the London market is saturated leading to many creatives looking for smaller, less recognised agencies where they can make more of a tangible impact. If you are a creative in Birmingham you will have heard of the Custard Factory and Fazeley studios – located in Digbeth and famed for being the most powerful cluster of creative and digital businesses, independent shops and event venues outside of London (for more information about Birmingham’s creative quarter, click here).

The Custard Factory is named as such as it was the original site where Bird’s eggless custard was invented and first produced. Now it’s famed for being Birmingham’s creative media hub and, true to form, is covered in street art that captures and illustrates the creative heart of the quarter. As the Peaky Blinder’s original stomping ground, they too are excited for Thomas Shelby to return to our screens: 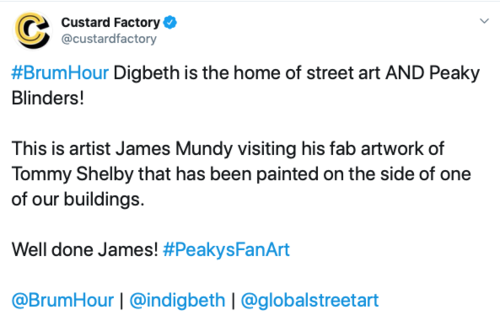 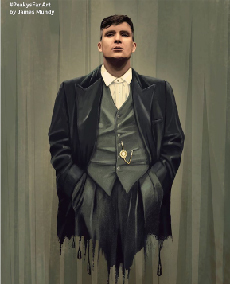 City of a thousand trades

I was fairly impressed to discover that more than 40% of the UK’s jewellery is made in Birmingham’s prestigious (and aptly named) ‘Jewellery Quarter’. I was more impressed when I found out that the Cadbury’s factory (est. 1824) was visited by Roald Dahl and thought to have inspired ‘Charlie and the Chocolate Factory’. Birmingham also has a rich history in food, invention and manufacturing. With more canals than Venice, many businesses settled here because of its vast water network. ‘The workshop of the world’ produced hundreds of great brands and inventions that we still use today - HP Sauce, the Microwave, Typhoo Tea, the Pen, Bird’s Custard, the Computer and the World Wide Web all owe their existence to Birmingham natives.

It’s common knowledge that Brexit is having a universally negative effect on industry, nationwide. Unless of course, you live in Birmingham, in which case, business is kind of… booming, actually.

‘Birmingham is such an exciting place to be at the moment! The City is seeing investment from all over the world and the residential development sector in particular is really booming with leading Developers from the South East and London now moving into the UK’s 2nd City. I believe this is partly down to how well connected the City is becoming with the extended tram line, Paradise Development taking shape now linking Colmore Row/ Grand Central with Brindley Place and of course there’s HS2… With the Commonwealth Games not far away there is so much to be excited about both personally and professionally.’ Stephen Brandsma (Divisional Manager, Built Environment).

With the expansion of the Tramlines and the city's ever changing skyline, Birmingham is one of the few cities where investment doesn’t seem to be affected by the threats of Brexit. Business and construction are thriving.

Based on the real life, Birmingham-based, cutthroat gang, The Peaky Blinders is an English crime drama that has given the world an insight into 19thand 20th century Birmingham. Set in the aftermath of the Great War, Thomas Shelby (played by Cillian Murphy) is an ambitious returning war veteran and head of his gangster family. The gang earned their unique name from lining their flat caps with razor blades – the functionality of this fashion choice is illustrated in the show. The immense success of the show has drawn thousands of visitors to the Digbeth area, though the nature of the show is raw, brutal and bloody – and we are hooked.