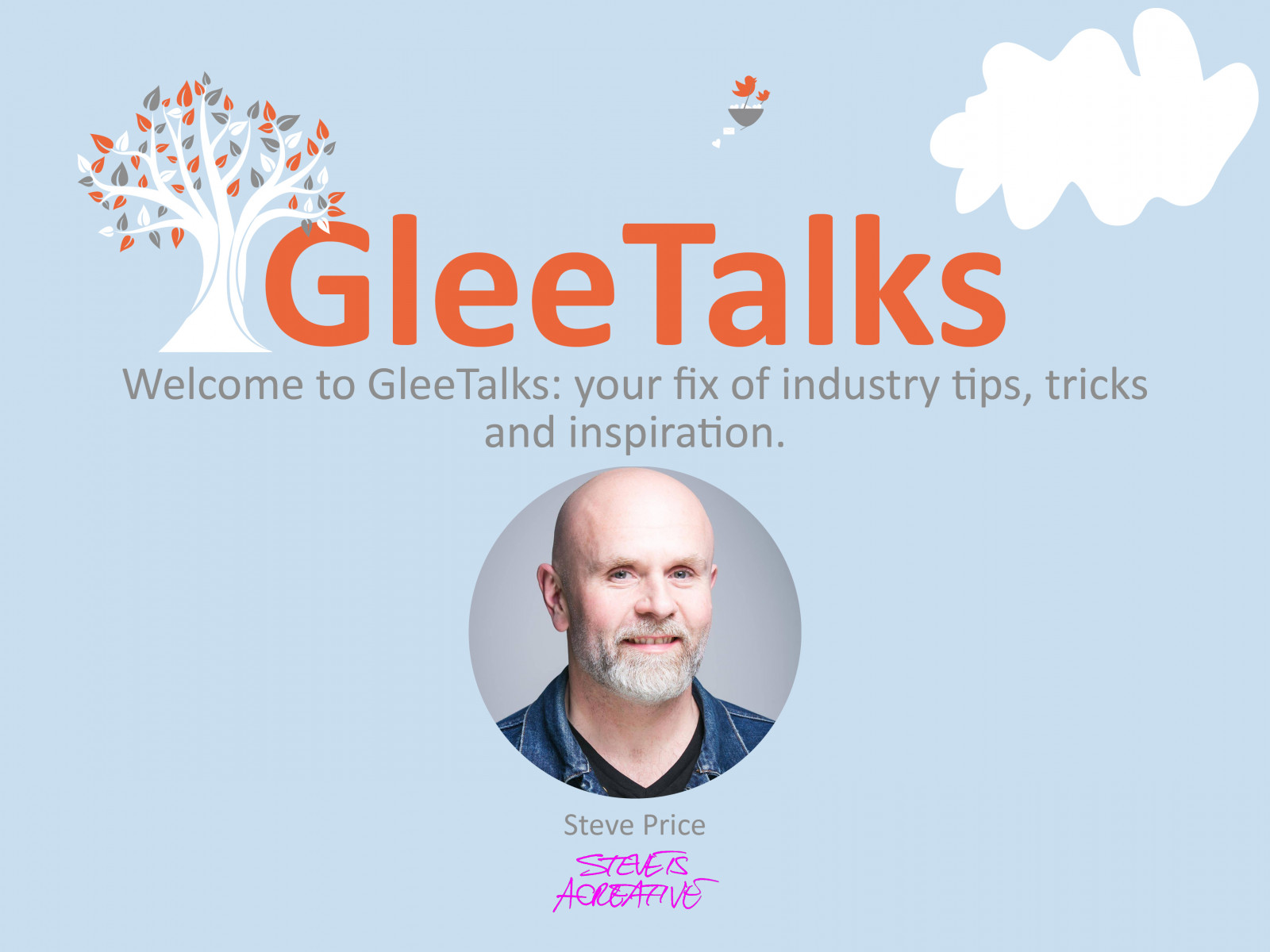 GleeTalks: What Makes a Great Portfolio with Steve Price

In this session of GleeTalks, we asked industry expert Steve Price to narrow down his five top tips for creating a great portfolio. With more than 30 years of experience in the creative industry, Steve has a holistic understanding of creative in design and advertising.

Your book should show your talent, your personality and your idiosyncrasies. It should be like your autobiography as a creative, really. You don’t want to be going on forever with 20 or 30 projects. 12 fantastic pieces of work, maximum. Between 8 and 12, as long as you absolutely know those pieces of work inside out; you can sell them, and they are your absolute best work. You want to be passionate about them and to be able to tell a story about each piece.

If you’re looking at your portfolio and thinking it’s a bit boring because maybe you’re in a Junior Designer role and you’ve been doing loads of amends and bits of crap, there’s nothing to stop you from stealing a brief from someone else’s desk and doing it anyway. Everyone’s got a piece of work in their book that’s fiction, even if they’re telling you they haven’t. We’re all blagging it to a degree, right? I think that’s an important lesson which I realised early in my career – if you make that bit of extra effort, it gets you over the line.

There’s nothing more frustrating than when someone comes in for an interview with a laptop that clearly isn’t going to work very well, it’s a MacBook from 2004, you know, the screen’s not great, etc. Now, not everybody has pots of money to throw at that sort of thing, but if you’re going to present on a device, make sure that device works and it shows your work off to the best ability. If your device is flaky, don’t present on a device, do it on paper. There are a lot of ways to show your work with storyboards and stuff like that, so presentation in that sense is really important.

The other side of it is presenting yourself and talking through the work. It’s like a pitch. You’ve got to know every single project inside out, back to front, and you’ve got to be able to sell it. It used to be, if I was talking a Creative Director about some job or other, they’d say send me your book and you’d send it remotely. Creative Directors are busy and sometimes they don’t have time to see you, so they’ll say ‘just send me your book and I’ll look at it and feed back’. In that situation, which isn’t ideal, you need some text explainers. But if you’re face-to-face then no words on the page or screen. Show me and tell me. Then here’s my leave-behind which you can pore over later. I think that’s something that a lot of agencies don’t do – their presentation will be too much written word. Show the work, talk about it, then have a leave-behind as a digest of your narrative.

Let your personality shine too!

I’ll ask myself, 'Can I work with you?' The higher up the ladder you get, the more important the presentation is because you’re going to want staff to sell to clients. I’m a firm believer that whatever level you are you should be capable of presenting your work to clients, even if you’re a junior. With an arm round you obviously but you should have the confidence and the belief in your work to sell it someone. Because there’s no one better to do that job than the person that has created it – with assistance from the agency obviously. They’ll say, ‘we’re going to do all the other related stuff really well,’ but when it comes to the idea, who better? I think it’s critical. If someone came in for interview and showed me beautiful work but were unsure of the story behind it, I’d think twice. Because, for me, that’s a massive part of the deal.

I’m also interested in, 'what else is in your locker?' Okay, so you’re a designer or a copywriter, or whatever but what else do you do? What do you in your spare time? I used to be in a band, I’ve done some acting and I think those things are really important to be able to build a picture of someone’s personality. So what other skills or passions you have, transferrable or otherwise, is another important point. I will always ask people who their heroes are. From anywhere not just the industry.

It’s so frustrating when you get to interview, and the candidate talks you through the same PDF sample of work that you’ve already had via email – so let’s not do that. If you’re going to send through some work, make sure it’s just a taster and then when you get to interview make sure there’s a whole lot more to talk through. Don’t just come with what I’ve seen. If I’ve already had it, I will have read it, considered it, and used that as a barometer to decide whether I want you to come and interview or not. If you just talk you through that same set of work again we might as well not have bothered. I’ve met you and I can see you’re a functioning human, but now I want some more. Your portfolio should be a hell of a lot more.

In the creative department, you clearly need somebody that can generate ideas. But you’ve also got to show that you can put those ideas in lots of places, keep it relevant and keep it fresh. Being a creative person, I think having your finger on the pulse is as important as anything. I love seeing portfolios where one minute they’re showing you a cutting-edge digital campaign, and then it’s a poster that’s screen printed by hand, or using hot-metal type and it’s like, 'oh great, you obviously care and you’re passionate about the industry.' You’re looking forward but you also know what’s gone before. There’s so much out there. You can create so much by yourself using what you can find on the internet – but variety is the spice.

The other thing that I think is quite important is really showing that you want the job, not 'here’s my portfolio, now you go and make your decision, and I’ll sit and wait'. I think that’s quite lazy. If you really want a job and you really care about it, you should show that you want it and do a bit extra. So, if you get called back for a second interview, do some more work. Maybe look at the agency’s client list and do something that’s relevant to them. When I’m pitching to a client, I don’t like talking about the agency too much because they know who we are, they’ve seen the website, they’ve had the credentials. So now we’re going to talk about you and what we’re going to do for your business. I think showing a little bit of willing in between the first and second interview, being industrious – either I’ve fed back to you and you’ve fixed those things, or you’ve done something extra; here’s a great social campaign for X client maybe.

I employed a designer recently. She’d done this lovely printed book with all her work in. Really beautiful thing but it was A4 size so it was a bit too small. You couldn’t see the detail. So I was there with my glasses on squinting, saying, 'yeah it looks great but – a bit of feedback, next time, much bigger canvas!' So she went away and did me an A3 version. And that’s the thing; you know, I gave some feedback, she took it on board and responded to it. Really, really important.

Please, please, please don’t spell anything wrong. It’s just a red flag. Particularly when you get into the more production-based roles, artworkers, etc. Get someone else to check if you need. I’ve done artwork myself – still quite enjoy it sometimes actually. They’re a bit different to full-on creatives in that you want a calm, measured, head in ridiculously tight deadline situations. You don’t want an artworker to be sweating in an interview, because you get the feeling that the minute it gets lairy they’re going to struggle. So you want that person to be calm and collected, and you want that portfolio to be pin-sharp. There are no mistakes, everything’s lined up: it’s a precision document. So that’s quite important when you get into the production side of it, but as a general point, for me, the detail is really important as that shows that you care. Attention to detail is a critical skill. Some creatives think, oh well, they’ll fix that in production, but it’s like y’know… come on!